Which Coach in Michigan Would Make the Best Drinking Buddy?

Social drinking is part of American culture. For better or for worse, it’s a great way to get to know others and bond in ways you may not have otherwise (done responsibly, of course). I mean, every four years when we get ready to elect a new president, something you often hear is “I could see myself grabbing a beer with them — they have my vote.”

Now, that’s likely not the best way to choose the leader of the free world, but maybe it would be better suited as a method for choosing the coach of your favorite team. It’s less about the actual drinking and more about the experience as a whole. This got us thinking — out of the major coaches in the state, who would make for the best drinking buddy?

This would be intense. The Michigan Wolverines football coach is constantly preaching his motto of approaching every day with an “enthusiasm unknown to mankind,” and something tells me even a casual drink or two among friends would turn into some sort of competition. While it would surely be fun, I think he would start out fast and have everyone thinking, “Wow, Jim sure has gotten better at this,” only to fall apart around midnight or so. There’s always next weekend, Jim.

Overall score: 4/10 It’s always entertaining, but his inability to finish a night without collapsing into the bushes is starting to just seem sad.

Though their antics are different, similar to Harbaugh, I have a hard time believing the Michigan State football coach has the ability to do anything at less than 100%. The night gets off to a quick start — things are looking up, everyone is having a good time — but Tucker has a particular tendency to take off and go to another bar without you pretty early in the night (often without saying goodbye).

Overall score: 6/10 You always have fun for the hour or so he’s there, but Mel always seems to ditch you around 10 or 11. Maybe one day he will make it to closing time.

Ah your old buddy Juwan. The Michigan Wolverines basketball coach is the star of your town — the big man on campus that everyone loves and wants to talk to when you’re out together — so that can get annoying from time to time. Not to mention he always brings three or four of his high-profile friends along with him.

As an ex-NBA guy he’s used to the good life – I’m thinking he’ll be drinking from the top shelf, as opposed to Bud Lights and cheap tequila. You’re glad he finds the time to come out with you – you’ve had a great time these last few nights he has – but you can’t shake the feeling that he might have his eye on bigger and better things.

Overall score: 7/10 Just enjoy his company before he moves away again.

The Michigan State basketball coach is the old man on the block. Beloved and revered by everyone in the bar. It’s like going out with your dad, but that can be fun sometimes, too, right? These days, you never seem to have the best night of your life, but it’s also very rarely disappointing. Every once in a while you think you might be in for one hell of a night, but these days Tom just ends up wanting to go home a little earlier than you wanted.

Overall score: 6/10 While you’ll always enjoy his company, and you would never admit it to anyone, you’re getting a little tired of hearing about that one incredible night out you had together 20 years ago – let’s make more memories now, Tom.

You can’t really put your finger on it, but whenever you go out together you feel like you may be in danger. The Detroit Lions coach refuses to drink anything other than Bud Light and gets in fights quite a bit — you even saw him bite a guy’s kneecap one time. What was that about?

Overall score: 4/10 You’re willing to give it a shot for a while longer – he can’t be much worse than your last few drinking buddies.

The Detroit Red Wings coach is all right, but you really just wanted him to bring his buddy Steve along. 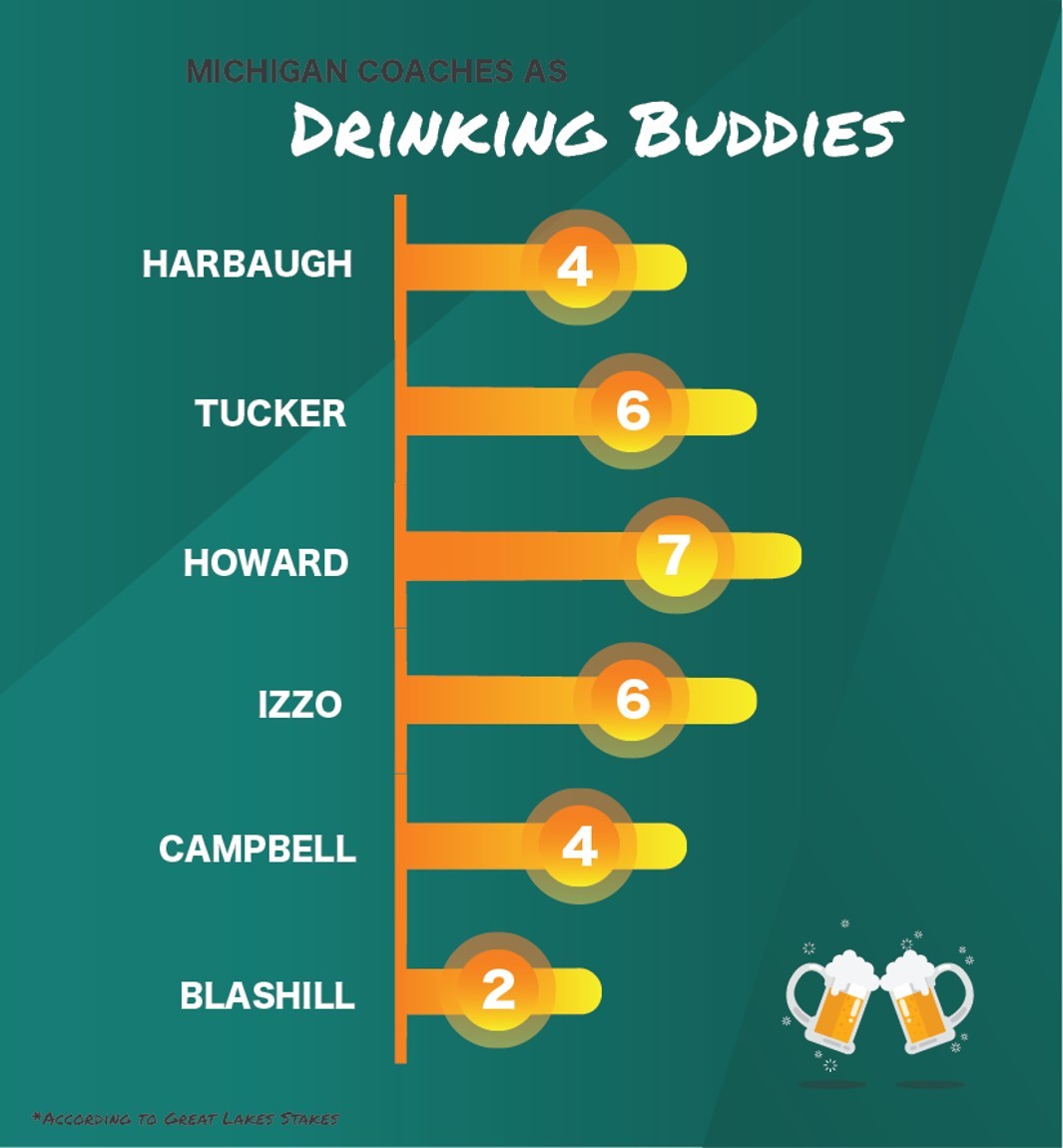 2nd Chance Free Bet Up To $500 - Promo Code: GREATLAKES
GREATLAKES
Terms apply for all bonuses. Must be 21+ to participate.