Sightings of the Supernatural

Aliens, ghosts, and the supernatural have long been a talking point across America, with tens of thousands of sightings of each documented since records began. But after the Pentagon released a statement in June last year revealing it has no explanation for 143 "unidentified ariel phenomena," evidence of the paranormal and life beyond this world has never been stronger.

So, we’ve decided to uncover the states where you have the greatest chances of spotting a UFO or ghost. Analyzing the number of UFO and ghost sightings in all 50 states, collecting information from the National UFO Reporting Center and Ghosts of America, we can reveal the odds of seeing the supernatural in each state. 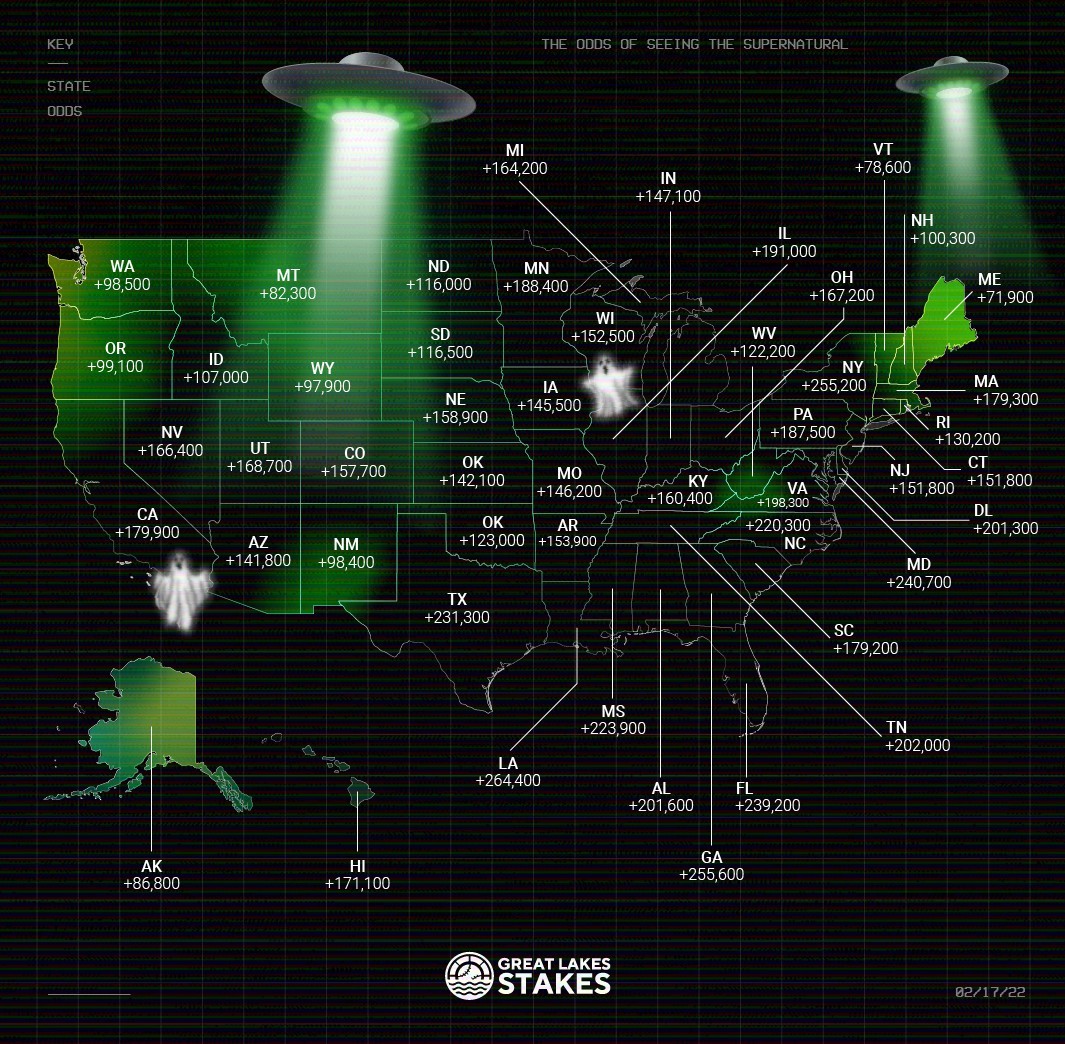 The most and least common places to see a UFO

Investigating sighting data since records began, we’ve been able to rank each state according to the likelihood of experiencing alien life.

Where are you most likely to see a UFO?

With an incredible 15,072 sightings in the Golden State, more than anywhere else in the U.S., California is the UFO capital of America. This is twice the number of extra-terrestrial encounters recorded in Florida (7,513) which places second overall.

Where are you least likely to see a UFO?

In contrast to California and Florida, which each recorded thousands of UFO sightings, both North Dakota and South Dakota have registered just 264 and 355 since records began, respectively. So if you’re on the lookout for alien life, steer clear from the Dakotas!

Extra-terrestrial sightings in Delaware are similarly rare, with just 373 ever, followed by Wyoming, which has recorded just 380. The chances of seeing a UFO ramp up slightly in Vermont (559) and Rhode Island (566), with each state registering 500+, but the encounter-rate is still leaps and bounds below the big hitters. Meanwhile, Alaska (611), Hawaii (634), Nebraska (653), and Mississippi (732) complete the ten least likely states to spot a UFO.

The most and least common places to see a ghost

Analyzing ghost sightings since records began, we can reveal the spookiest states across America, and where you’re safest from spirits and specters!

Where are you most likely to see a ghost?

In America, ghost sightings aren’t quite as common as extra-terrestrial experiences, but that’s not to say that some states don’t have a very real history of seeing spirits. In fact, there have been a whopping 7,382 registered sightings in Texas alone, making the Deep South region the spookiest state in America.

Completing the top ten places to visit for almost-guaranteed ghost sightings, we have Pennsylvania (2,239), Indiana (2,150), New York (2,130), Oklahoma (1,901), and Virginia (1,869). Meanwhile, despite having a rich history of the paranormal thanks to its infamy as the site of the seventeenth century Salem witch trials, Massachusetts (1,409) can only place 16th for spooky encounters.

Where are you least likely to see a ghost?

With just 123 ghost sightings since records began, Delaware is officially the least spooky state, followed by Hawaii (185) and Wyoming (215), which place second and third, respectively.

Taking combined paranormal experiences and population of each state into account, we’ve revealed the areas across America where you have the highest and lowest chances of experiencing the supernatural.

Where are you most likely to spot the supernatural?

Combining overall UFO and ghost sighting data since records began, and taking population into account, the state with the highest chance of supernatural sightings is Maine, with odds of just +71,900.

Where are you least likely to spot the supernatural?

With massive odds of +264,400, Louisiana is the state you’re least likely to experience the supernatural.

When using this data and research, please attribute by linking to this study and citing GreatLakesStakes.com.