Have you ever wondered which sporting stars the people of Michigan adore the most? We’ve analyzed popularity data to bring you Michigan’s top five hometown heroes.

Leading the way as his home state’s greatest sporting hero of past and present, former basketball star and NBA great Magic Johnson steps up to take his title. In a state brimming with legends, fellow basketball icon Tom Izzo is joined by boxer Joe Louis and hockey champions Gordie Howe and Steve Yzerman – both born in Canada but forever associated with the Detroit Red Wings – to make up the top five. 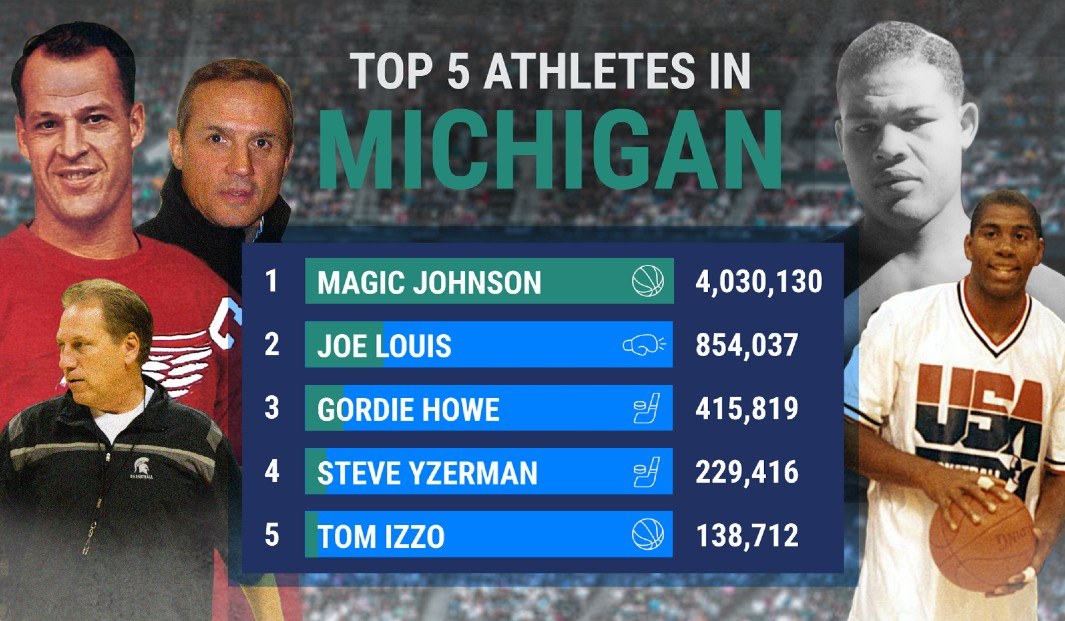 Learn A Little More About Each Hometown Hero

One of the most recognizable names worldwide, Lansing-born legend Magic Johnson is considered by many to be the best point guard basketball has ever seen. He won five NBA championships and three league MVP awards playing for the Lakers. The basketball icon also won gold with the U.S. team at the 1992 Olympic Games and an NCAA national championship at his hometown school, Michigan State.

Widely regarded among the greatest boxers of all time, Joe “Brown Bomber” Louis is also celebrated for the cultural impact he had in breaking down racial barriers as an African American star during the 1930s and ‘40s. He originally hailed from Alabama, but Louis moved to Detroit with his family when he was just a child and he is locally considered a homegrown Michigan hero.

Saskatchewan-born Gordie “Mr. Hockey” Howe enjoyed a long and successful NHL career, mostly with the Detroit Red Wings, where he won the Stanley Cup four times. Generally accepted as the most complete player to grace the ice, Howe’s time with the Red Wings places him in very high regard for fans of all ages across Michigan.

Steve Yzerman spent his entire NHL career with the Detroit Red Wings, from 1983 to 2006. Of his 22 seasons with the Red Wings, the British Columbia native was captain for nearly two decades. He led Detroit to three Stanley Cup championships and retired as the longest-serving club captain of any major North American sports team. Yzerman is now the Red Wings’ general manager.

College basketball coach Tom Izzo has been on the staff at Michigan State since 1983 and has been head coach since 1995. During his reign the native of Iron Mountain, Michigan, has led the Spartans to 10 regular-season Big Ten titles (including three consecutive crowns in 2018-20) and the 2000 NCAA national championship. In 2021, Izzo led Michigan State to its 23rd consecutive NCAA Tournament.

To rank Michigan’s top five hometown heroes, GreatLakesStakes.com first collected data around the state’s most successful and prodigious athletes from Bleacher Report. From here, we analyzed each athlete’s Wikipedia page to assess visits during a 12-month period between March 2020-March 2021. The athlete with the most page views during this time is considered their state’s leading hometown hero, with the next four making up the top five.