Everyone knows Michigan is a state full of sports fans, each with an affinity for the exciting. But which five sports do the locals rate the most highly?

Like much of the country, there’s no other sport the people of Michigan love more than football. Again, echoing the mood of the nation, basketball and golf are voted second and third most enjoyable sports, respectively. Rounding off the top five sports, according to our measure for Michigan, are NASCAR and baseball. 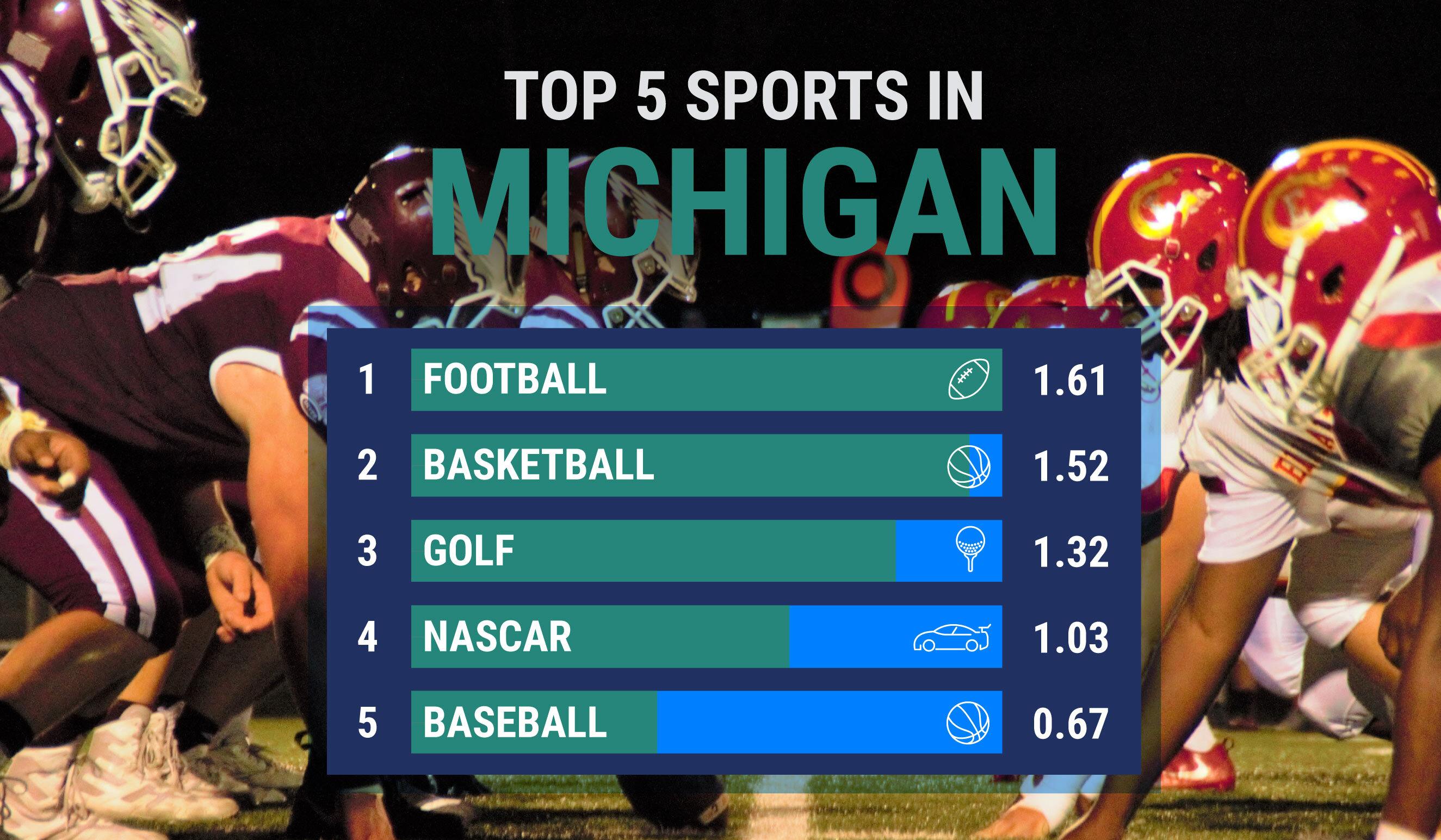 Football ranks highly nationwide and at the top in Michigan. The sport’s statewide prominence includes the NFL’s Lions, who have played in Detroit since 1934. The Lions have won four NFL championships, all well before the Super Bowl era. College football is also huge in Michigan, with rabid fans following the University of Michigan Wolverines and Michigan State Spartans among teams.

The second-most popular sport for Michigan sports fans is basketball, where again the state’s two most prominent colleges, the Michigan State Spartans and Michigan Wolverines, stand out. With two Big Ten titles apiece within the last five tournaments, there’s little to separate them in recent years. The NBA’s Detroit Pistons have won three league championships and have a hardcore following too.

Bloomfield Hills might be the state’s standout backdrop, but don’t forget the 650 other courses dotted across Michigan that make golf so popular locally. For those more inclined to watch the sport on TV, the state features as part of the U.S. Open from time to time, most recently at the Oakland Hills Country Club’s South Course in Bloomfield Hills for the 1996 event.

A top five sport according to the people of Michigan, NASCAR is favored for its easy-to-follow format and exhilarating drama. The Michigan International Speedway, a 2-mile oval, is the biggest attraction for local fans, with the track hosting two NASCAR Cup series events per year. MIS is one of the fastest tracks in NASCAR.

Just managing to claim a spot among the state’s top five sports, baseball is consistently popular with casual and serious fans alike. Impressively, the local MLB team, the Detroit Tigers, has been based in Michigan for more than 120 years and brought four World Series titles to the state in that time.

To bring you Michigan’s five favorite sports, it was first important to consider both Google search volume data and social media sentiment data for each sport. Giving each of 10 different sports a value for each of these two factors, we ranked them accordingly. From here, each Michigan sport was assigned an index score between 0-1, relative to their ranked position, for each of the two factors.

By combining the two index scores, we were able to give each sport a score between 0-2 to find the top five across Michigan.

Detroit Pistons Have a Lot of Options with No. 5 Pick in 2022 NBA Draft