With the NCAA college football season winding down in just a few weeks before conference championships, the top teams this year are starting to surface toward the top of the AP Poll Top 25 that gets released weekly. With Michigan State and Wake Forest suffering upsets in Week 10, we have a new set of Top 10 teams in the AP Poll this week.

Now while the common thought process would be that the Top 10 of the NCAA AP Poll would be well represented by the top teams from a recruiting perspective, that is not necessarily the case. We analyzed the recruiting rankings of the official offensive and defensive starters from the NCAA AP Poll Top 10 on 247Sports.com, to reveal how the current teams stack up against each other. 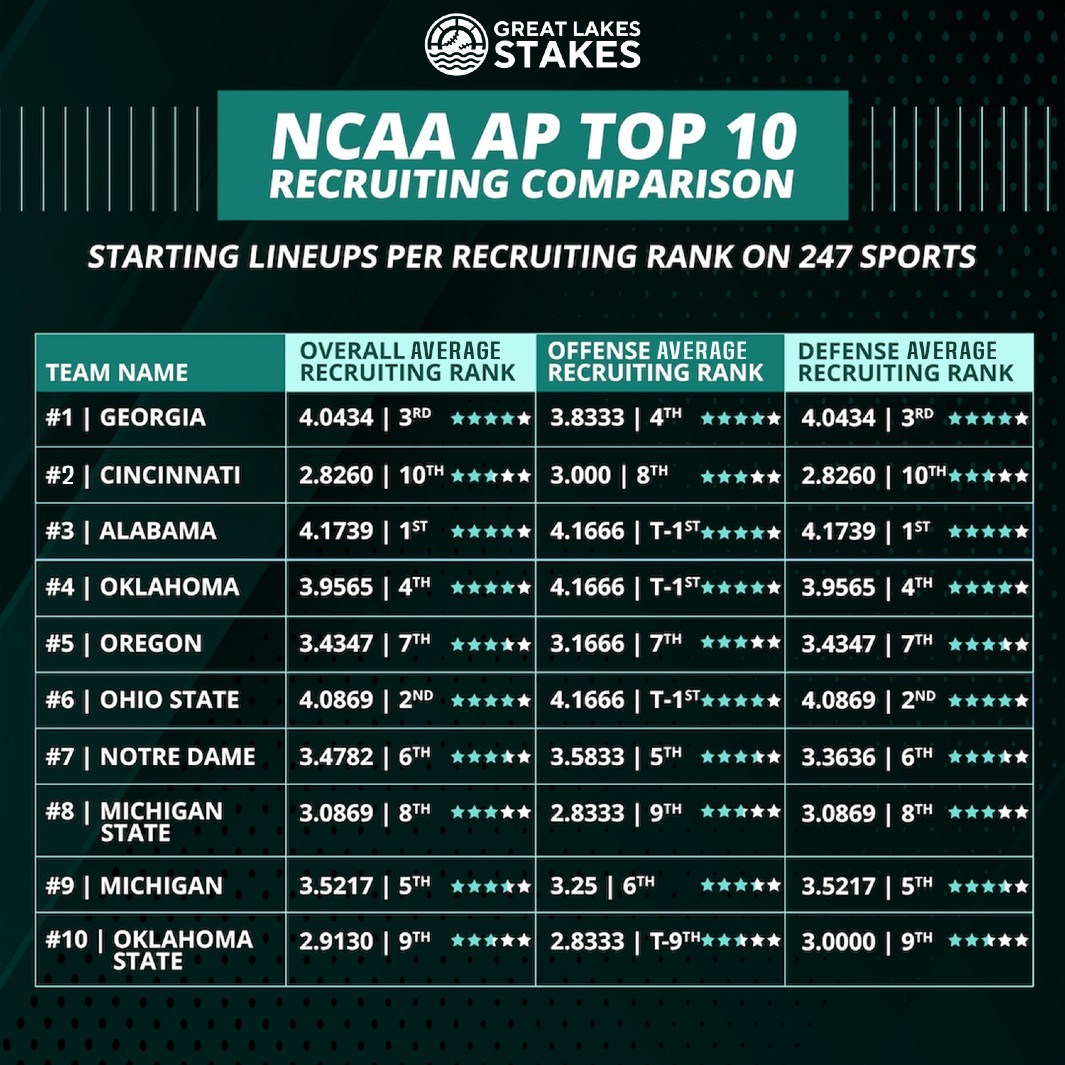 Has it been Michigan’s Recruiting Prowess that has put them in the Top 10?

The Michigan Wolverines responded to their first big loss of the season to their cross-state rival by beating Indiana at the Big House this past Saturday night. The program is on its way to having one of its best seasons under head coach Jim Harbaugh and is hoping to best the Ohio State Buckeyes in the coming weeks. The Wolverines are in the nation’s Top 25 in both offensive yards per game (YPG) and least yards per game allowed (YPGA) on defense, according to NCAA.com.

Could it be Harbaugh’s strong emphasis in bringing major recruits in from across the country? The short answer — yes. No doubt that the squad has put in many practice hours to get to a top level of performance this year, but finishing in the Top 25 in the nation of 247Sports Recruiting Rankings for 5 straight years will eventually pan out.

The defense held the Indiana Hoosiers to just 195 yards of total offense, the lowest total by any Michigan defense in more than two years. The defense has truly been the story of the season as Michigan has held opponents to only 18 touchdowns and 298.1 yards per game. The starting defensive unit ranked 5th among the AP Top 10 teams in terms of recruiting, which shows that strong talent mixed with great coaching will produce results.

Moving into the heart of their season, the Wolverines will see Penn State this upcoming Saturday, followed by Maryland and then their season-ending brawl against Ohio State. The Michigan starting offense, which was only an average of 3.25 stars during its recruiting period, will certainly have to improve — it has only come away with 25 touchdowns in 45 trips to the red zone.

Harbaugh would love to take that next step back into College Football Playoff relevancy but bringing in top talent to compete will be crucial. Currently, Michigan sits 4th in the Big Ten in 247Sports Recruiting Rankings for this upcoming 2022 recruiting class. Could that be what holds them back?

Has Mel Tucker put Michigan State back to Relevancy in the Big Ten?

If you would have told Michigan State fans in the preseason that the team would be 8-1 and projected to play in the Peach Bowl on Dec. 30, they probably would’ve been pretty pleased. But it has been heartbreak the past few days for the Spartans after they dropped a game against Purdue, an opponent which has dashed the hopes and dreams for Top 10 Big Ten teams in recent history.

Two years ago, former Head Coach Mark Dantonio left the Michigan State football program as its all-time winningest coach with 114 wins. After mediocrity for two seasons, then a 2-win shortened campaign in 2020, East Lansing was in a tizzy about their future as a strong program in the Big Ten. Head Coach Mel Tucker has calmed those questioning the program with this impressive run, even taking down rival Michigan in the process.

Unlike its cross-state foe, Michigan State has struggled to convince big-time 4-star or 5-star recruits to make their way to East Lansing for a bitter cold Big Ten schedule. However, that never has been a problem for the Spartans. Out of the current AP Top 10 this year, the program has the 8th best overall recruiting ranking, according to 247Sports.com. To find themselves in the CFB Playoff discussion this year, after never breaking the nation’s Top 30 in recruiting over the past five years, has been a testament to the great coaching and preparation of the team.

Former 3-star running back Kenneth Walker III has even climbed his way into contention for the Heisman Trophy this year, as he leads the nation in rushing yards (1,340) and is tied for 2nd in touchdowns (16). The Spartans have always been able to utilize 3-star players like Walker to get into the national conversation year after year.

The next biggest test for Tucker? Proving that the success of the roster isn’t a product of the recruiting classes brought in by Dantonio. The current freshman class, brought in by Tucker, was the lowest ranked recruiting class (#46 in 247Sports Rankings) in the past five years for the Spartans. He will have the opportunity to prove his recruiting chops, as they currently sit at 17th in the nation for the 2022 class.

To determine how the NCAA AP Poll Top 10 stack up against each other from a recruiting perspective, GreatLakeStakes.com utilized the official recruiting website, 247Sports.com to gather the star ranking of each offensive and defensive starter from the official depth charts released for the teams. While each team has various positions in their starting depth charts, 23 players were gathered from each team to preserve continuity. After we gathered the information, we averaged each team to find the average star ranking for each team from an offensive, defensive and overall perspective.

All recruiting rankings were from their initial high school recruiting season, including all transfers on new teams. Transfers represent their star ranking from their recruitment from their previous team. All rankings are subject to change on other recruiting websites, but these represent 247Sports.com.

When using this data and research, please attribute by linking to this study and citing greatlakestakes.com.