According to a new GreatLakesStakes ranking system, Detroit Pistons fans are among the least rewarded fanbases in the NBA across Michigan sportsbooks, and it’s not hard to see why.

The Pistons are shoulder deep in a rebuild, with Cade Cunningham, Isaiah Stewart and Killian Hayes are in their 20s and all in the pipeline. This summer they added lottery picks Jaden Ivey and Jalen Duren, who are younger than the other three.

They made an interesting trade for Utah’s Bojan Bogdanovic, a veteran shooter, before training camp, a move that indicated they have loftier aspirations than the draft lottery this season.

So we’ll have to wait and see how players like Cunningham and 23-year-olds Saddiq Bey and Marvin Bagley III pan out.

In the meantime, the team's 2-6 start has provided less than glamourous hopes for the near future.

Stay close to GreatLakesStakes for the best MI betting promotions during the NBA season.

How We Got Here

GreatLakesStakes developed the system for all 30 NBA teams covering the past 11 seasons.

The first category “Minutes Spent Per Win” was determined by taking the amount of regular season games played by each team (from 2011-12 season to 2021-22 season) multiplied by the average length of an NBA televised game (2 hours, 13 minutes).

The second category “Points Deducted for Playoff Success” was utilized to decipher the value of seeing playoff success during those 10 seasons gathered in the first category. The point values were 1 point per playoff berth, 3 points per playoff series win, 3 points per NBA Finals appearance, 15 extra points for NBA Championship win.

After adding all the points together for every postseason from 2011-12 season to 2021-22 season, the points were deducted from Category 1 to arrive on the final points and rankings. 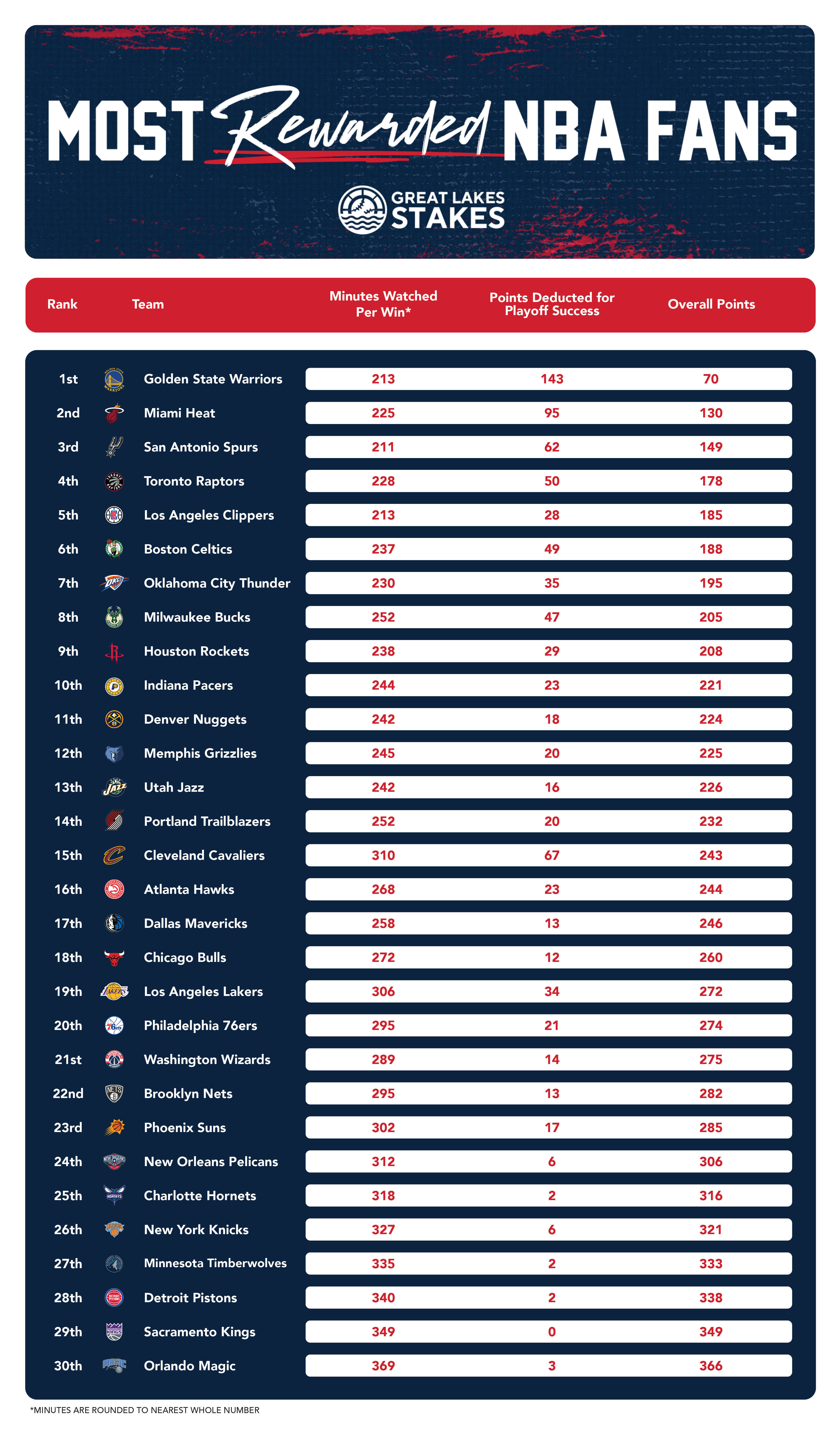 $1,000 No Sweat First Bet
Activate Code
Terms apply for all bonuses. Must be 21+ to participate.

How Can Detroit Gain Ground?

So Detroit fans, we feel your pain, and the numbers bear this out. The team is young, very talented, but can they blend it together, really leverage that underdog mentality, even make a run at the play-in tournament?

Dwane Casey is a veteran coach, who won coach of the year honors with the Toronto Raptors in 2018, before joining the Pistons.

He has his work cut out for him this season though, as his odds to win coach of the year again at BetMGM Sportsbook MI is +10000.

In other words, it’s nowhere to go but up for Pistons fans.

Mark Keast has recently covered the sports betting industry in Canada for The Parleh, and is a long-time sportswriter and editor, most notably with the Toronto Sun.