Big Ten Against the Spread in 2021: Michigan, Michigan State Finish as Top 2

The 2021 Big Ten football season wrapped up Saturday with the No. 2 Michigan Wolverines thumping Iowa 42-3 to capture the school’s first conference championship game.

With the Maize & Blue headed to the College Football Playoff, GreatLakeStakes.com took a look back at how the Wolverines — and Michigan State Spartans — fared against the spread this fall.

Our research was broken down by teams’ records against the spread, as well as how many points they covered by during victories, and how close they were to covering the spread in their losses. It’s information fans can use when hitting Michigan betting apps during the bowl season.

Michigan faces Georgia on Dec. 31 in the Capital One Orange Bowl, one of two CFP semifinals. BetMGM has the Wolverines at +7.5 with a moneyline of +230.

Michigan State faces Pittsburgh on Dec. 30 in the Chick-fil-A Peach Bowl. Caesars Sportsbook has the Spartans at +3.5 with a moneyline of +160. 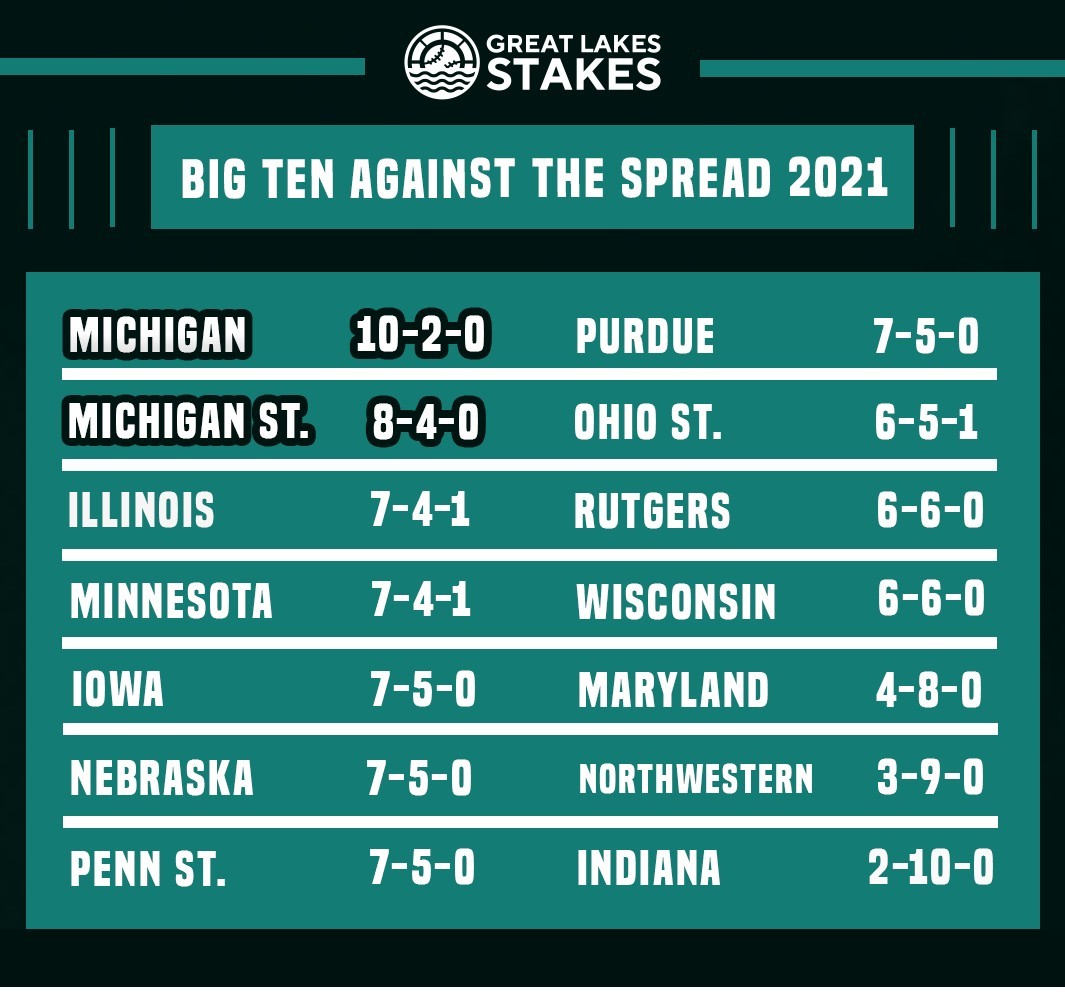 Our research found the Wolverines (10-2) and Spartans (8-4) finished atop the Big Ten against the spread in 2021, likely leading to a lot of happy Michigan online gambling fans.

Both the Illini and Cornhuskers fared much better ATS than they did overall, as Illinois finished the season 5-7 and Nebraska faltered to 3-9.

A main reason for the Buckeyes’ lack of success ATS in 2021 came from being betting favorites in all their contests, including 11 in which the line was 10-plus points.

Bet $5 On Any Sport, Get $150 If You Win
Activate Code
Terms apply for all bonuses. Must be 21+ to participate.

How Many Points Did Big Ten Teams Cover by in Against the Spread Wins? 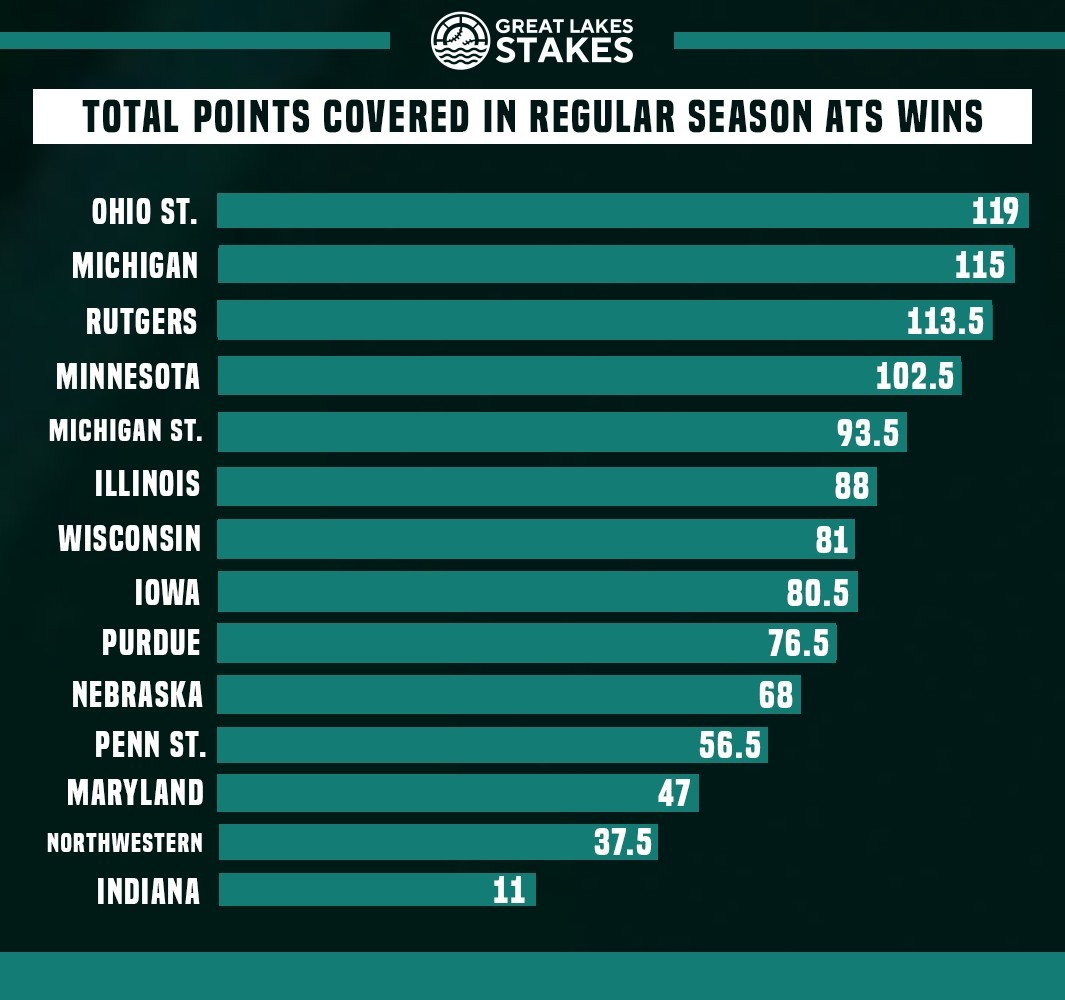 One of the takeaways from the 2021 regular season was Ohio State, despite going 6-5-1 ATS in 2021, shellacked its opponents when it did cover.

The Buckeyes covered the spread by 96.5 points in four of their wins during the 2021 regular season and finished with the conference’s largest total of points covered in their wins at 119.

$1,000 No Sweat First Bet
Activate Code
Terms apply for all bonuses. Must be 21+ to participate.

How Close Were Teams to Covering in their Against the Spread Losses? 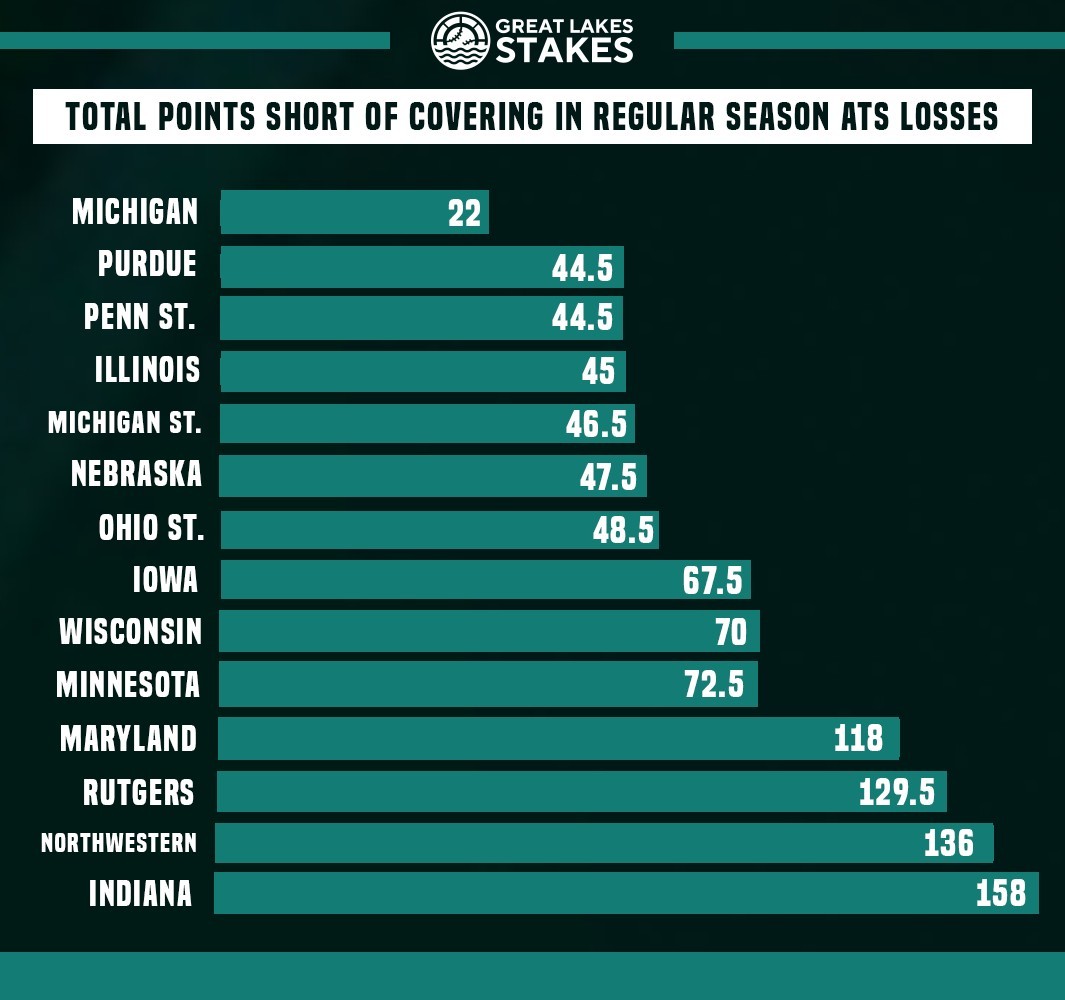 The Wolverines finished the 2021 Big Ten season with two against the spread losses, missing out on covering the spread by 22 points in those games.

That effort led all 14 teams in the conference, in terms of total points short of covering in regular season ATS losses, ahead of Purdue and Penn State (44.5), Illinois (45) and Michigan State (46.5).

GreatLakeStakes.com gathered all of the data and odds for this article by combining the spread from 12 sportsbooks into the average odds for a game. After gathering the odds for each team, GreatLakesStakes.com tracked the results week-by-week in order to determine the overall records and statistics used for each team.

When using this data and research, please attribute by linking to this study and citing http://www.greatlakestakes.com.